For some time I have been keeping a close track of UK house prices. Thanks to our national obsession with housing they’re constantly in the news, but the average personal finance journalist merely regurgitates whatever propaganda the estate agents, mortgage lenders and house builders trot out. So here’s my attempt at showing a deeper look at the facts, which I will split into several parts. This part tries to put things into a bit of historical context.

The chart below shows the history of UK house prices (according to The Nationwide) over the 45 years from 1964 to 2009 Q1 (i.e. this is based on figures released at the start of April 2009), and the average earnings index (according to the Office of National Statistics – more info here). Between 1964 and 2003 the average property has been almost exactly 4x the average income, so the chart actually shows incomes multiplied by 4 so that it’s easy to make this comparison. 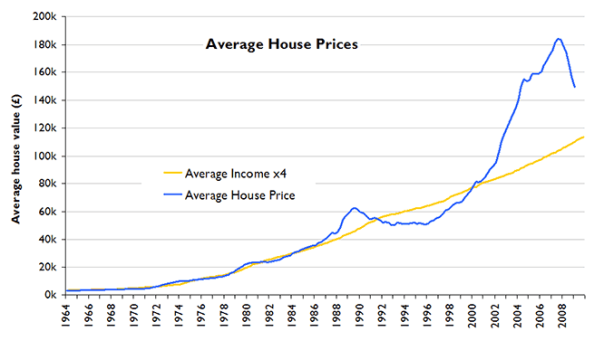 What strikes you looking at this is how spectacular the latest house price bubble looks compared to years past. The late-80s bubble and 90s bust is also clear, but it’s hard to see anything of what went on before the 80s because inflation from the 70s and 80s means that everything is squeezed up. When it comes to things like house prices a 50% increase is just as significant whether it’s from £4,000 to £6,000 or from £100,000 to £150,000, but it doesn’t look that way on the chart.

The obvious (and extremely rarely-seen) solution is to show the same data on a log scale, in which a % change is represented by the same vertical distance whether the actual value is large or small, shown below:

This shows that incomes and prices are closely linked, and this would make sense: the chronic shortage of houses in this country means that everyone will pay as much as they can afford (or believes they can), thus defining the market price. Some have said that low interest rates mean people can afford bigger mortgages, but I would argue this is only true if it’s low real interest rates. That’s something for a later article…

It’s also clear that prices have deviated from incomes plenty of times before, including a bubble in early 70s (burst by dint of high inflation rather than actual falls in house prices), another one in the late 70s (ditto), then the notorious bubble and crash of the 80s/90s which left many households in negative equity due to the unprecedented fall in nominal prices. This was then following by a sustained period of low inflation from the early 90s onwards, and the emergence of the bubble that is now deflating.

What I think most striking from the above is how sustained the noughties bubble was – it got going in 1999, kept surging ahead until 2004, and then stayed inflated (continuing to increase in line with or ahead of incomes) for at least another 3 years, defying gravity like a carton character that’s run off a ledge. It now seems that this was only made possible by a huge expansion in the amount of credit in our economy, imported from high-saving emerging economies and made possible by such toxic inventions as CDOs and the like.

Given that prices and incomes look linked, let’s look at the ratio of the two…

This shows clearly the history of this relationship – an apparently relentless cycle of booms and busts. It also shows that despite recent falls the ratio has just reached thesame level it reached at the very peak of the 70s and 80s bubbles! If this housing cycle follows the pattern of those before it then the market will stabilise when this ratio drops below 4 (which was the average between 1965 and 2003), which on current form will be some time in 2010, with prices about 20% lower than they are now, and approximately 40% below their 2007 peak. In other words, that would mean we’re only half-way through this crash! And that’s exactly what the derivatives markets think: just published by Tradition, the latest figures on housing futures show that prices are expected to drop by 19% between now and March 2010. Whether that really will happen remains to be seen, but as a potential first-time buyer I am hoping so!

Part 2 will look into regional differences, and will shed some very illuminating light on just how big the differences are between different parts of the country and what it might mean for the future.