Over 10 years ago I, together with my sister Elva, my mum Marion, along with Simon Linford and Alan Regin, created a survey designed to dig into what characteristics made someone well-suited to becoming a church bellringer, and particularly to whether they were going to have the potential to ‘go far’.

Follow this link to read the article we wrote summarising the results: Ringing Survey Results 2004.

In summary, the key points were:

We’ve now got a revised version, and if you’re a bellringer you’d be very welcome to try it out. It’s similar in some ways but has a few improvements and additions. In due course we hope to be able to let people see their individual profile after they’ve done it, but for now you’ll just be contributing your data, which will be much appreciated!

Thank you very much. Watch this space, and The Ringing World, for updates.

So I grew a beard, then got rid of it…

When I was 31 I decided I would try growing a beard. I had the perfect opportunity, a 3 week holiday in the form of my honeymoon, long enough to pass through the scruffy-looking tramp beard stage. I’ve not got that heavy a stubble, and my beard is quite ginger, so it needed all the help it could get!

After a year I decided to give it the chop. Enough people said they liked it for me to keep it going for quite a while (most women said they liked it), but not quite enough people for me to really feel it was for me. The tricky thing is that people are quite hesitant about telling you what they really think about it – they either tell you they like it (though they may just be being polite), or they say nothing at all, which is the polite way of saying that it makes you look like a tit.

… but not before doing some quantitative analysis

So anyway I decided to shave it off. However, when I cut it off I thought I would take the opportunity to do a bit of quantitative analysis of the effect my beard had on what people thought of me. In particular, many people had said that they thought it made me look more authoritative or older. But how much older? And if it did make people think I looked older than I really was?

I hit upon the idea of using the rather splendid website guessmyage.net. As a visitor to guessmyage.net you get shown a picture of a person and you have to type in how old you think they are. On hitting submit you get to see not only the real age but also the average of everyone else’s guesses. This page also shows you another person, and you just can’t resist having another go. And so it goes compellingly on.

When I shaved my beard off I took a succession of photos showing me in various stages of debeardification. We had some fun with it…

I then submitted the following two photos to guessmyage.net, together with my actual age which at that time was 32 though very close to my 33rd birthday. I then waited until I’d got 50 responses on each photo. The results are shown below:

(I have a residual concern that my photos weren’t quite similar enough. In my bearded one I’m smiling a bit more, so my crow’s feet are a bit clearer. )

This is all very consistent with academic research on the effect of beards on perceived age. Dixson and Vasey (2012) contrasted otherwise identical pictures of men with either a very full beard or being clean-shaven, and found that having a beard led to men being perceived as…

The literature is thoroughly confusing on the question of whether beards are actually attractive. Dixson & Brooks (2013) found that the most attractive level of beardedness was of intermediate length. Reed & Blunk (1990) found that beards made prospective management job candidates more likely to be chosen, whereas Muscarella & Cunningham (1996) found that beards were considered less attractive. And Janif, Brooks & Dixson (2014) found that attractiveness was influenced by whether beards were ‘normal’ or unusual, leading to many news articles talking about the current fashion for beards perhaps resulting in us hitting “peak beard”.

Finally, this study found that cats do not like men with long dark beards or with ‘incomplete’ beards. Something to bear in mind, I’m sure you’ll agree.

A few years later, then aged 37, I decided to grow my beard back. I had a new job as an independent consultant and so I felt it would be a good thing to make myself look older and wiser. I keep it shorter these days – better to be light than fuzzy, I reckon. I submitted another pair of photos to the website. This time I took more care to make sure my facial expression was identical between the two, and gathered more responses too. Here’s the result: 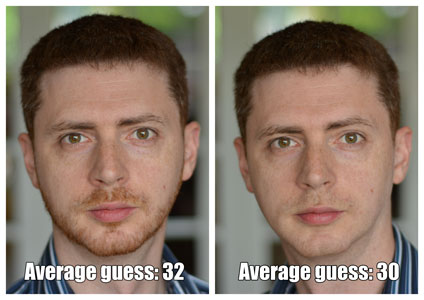 So there you have it, these days my beard adds 2 years to my perceived age. But is this a statistically significant result?

In an earlier version of this post I’d asked people to predict what the age difference would be.

They over-egged it a little, with a mean guess of 3 years. But that’s provided me with a crude indication of variation in perception. This is enough to confirm that the difference is statistically significant (t-test, n=200, p<0.01), which will be a weight off your mind, I’m sure.

What to measure next?

For now I’m planning on keeping my beard. I don’t have an easy way of statistically measuring its effect on my perceived attractiveness, intelligence, social status, aggressiveness or appeal to cats. Putting a poll here won’t be much good because you’ve read the article so you’ll be influenced by that. But feel free to post a comment with your views!

My family and I often drive 180 miles between St Albans and Huddersfield to visit the in-laws, most of which is just going along the M1. It’s common knowledge that the faster you go the higher your fuel consumption, so I was wondering what speed I should go at to get the optimal balance between time taken and money spent on fuel?

END_OF_DOCUMENT_TOKEN_TO_BE_REPLACED

In Mark Kermode’s review of Toy Story 3 (available as a podcast and here), which he liked a great deal, he contemplated that Toy Story might be the best film trilogy of all time. This is mainly because the last film is extremely good, and that’s not the normal pattern with sequels. The other main contenders he considered were The Godfather (let down by number 3) and the less-well-known Trois Couleurs trilogy.

I saw it the other day and felt inclined to agree – it is really excellent. After mentioning this on Facebook and getting some good counter-suggestions from friends (Bourne, Indiana Jones, Back to the Future), I thought I’d find out if he’s right with some hard-core analysis…

END_OF_DOCUMENT_TOKEN_TO_BE_REPLACED

I’ve just found a fantastic article which I really like for its many interesting maps. It tells the story of how surprisingly pale-skinned Europeans are (given that other peoples from similar latitudes are still fairly brown).

Apparently, the explanation is that the Gulf Stream (which keeps Europe much warmer than other places that far north) allowed for the growth of cereals (wheat, etc.) starting about 5,000-13,000 years ago, and the widespread adoption of cereals in Europeans’ diets caused a significant shift in our skin colour – it’s all to do with vitamin D and folates. And the shift in skin colour in turn caused the incidence of blond hair and blue eyes which is so unique to northern Europeans.

Read the article to find out more.

My new daughter is currently too young to learn her alphabet (10 months), but it won’t be long and I was thinking about putting one of those alphabets up in her room where there’s a little picture of something for each letter.

My brother-in-law (Iain Anderson) and has been collecting the basis for a nonsense alphabet – a set of words for a children’s alphabet board that would really mess up my daughter’s education if I pinned them up in her room! Below is my slightly improved set [EDIT March 2011: now including some commenters’ suggestions]

I’ve indicated why it’s in with a category, as shown below in decreasing order of how much I prefer them…

A few years ago I looked after analysis and tools within the Site Research (location analysis) department in Tesco. One of the things that I loved about that job was access to all the cool mapping tools and data. It gave me a much better insight into human geography.

Anyway, below is a chart I produced at one point which I think is rather nice, based on the 2001 census. It shows the distribution of the population of the UK where each point is the population-weighted centroid of a ward. Britain  is split up into 408 Local Authorities (average size 140,000, the largest being Birmingham with 977k, with the smallest generally being no smaller than about 25,000 apart from islands like the Scillies), and each of those split into 10,000 Wards which are the units used for election of local government officials (average size 6,000, varying from 100 to 35,000).

END_OF_DOCUMENT_TOKEN_TO_BE_REPLACED

For some time I have been keeping a close track of UK house prices. Thanks to our national obsession with housing they’re constantly in the news, but the average personal finance journalist merely regurgitates whatever propaganda the estate agents, mortgage lenders and house builders trot out. So here’s my attempt at showing a deeper look at the facts, which I will split into several parts. This part tries to put things into a bit of historical context.

END_OF_DOCUMENT_TOKEN_TO_BE_REPLACED

Here is a list of all of the investigations that I’ve conducted that I could publish but haven’t yet. Any requests?